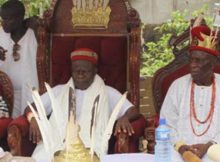 In Igbo traditional religion, there are certain places and things that are considered highly sacred. These “sacred” places or things could either be a piece of land, a certain kind of animal, specific water bodies, masquerades etc.

The specific places or things we, Igbos, consider sacred in our traditional religion are relative to particular communities. Here’s what I mean; what is considered sacred in Ogidi community may not be held in sacredness at Abakaliki. Hence, we, Igbos, have saying that goes: “Ihe ndi na-eri, ka ndi na-aso,” which literally translates into “what some eat, others consider sacred.”

However, whatsoever a particular Igbo community considers sacred in Igbo traditional religion has a very significant and interesting story behind it which has informed the adoption of that belief. For instance, in Agulu community, crocodiles are considered sacred and should not be hunted for any reason, because Agulu people believe crocodiles were messengers of Chukwu sent to protect the people from attacks emanating from enemy communities.

Now, let us considered some category of things we, Igbos, consider sacred in our traditional religion.