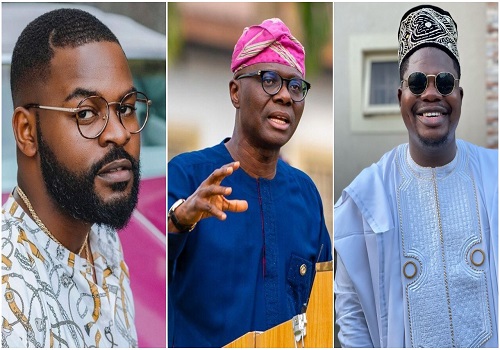 Lagos Governor Babajide Sanwo-Olu has called on leading entertainers Falz, Mr Macaroni and Seun Kuti to join him for a walk for peace in Lagos.

Sanwo-Olu made the call on Tuesday in his speech to the people of Lagos State on the Lekki tollgate incident.

The Governor called on the entertainers, who joined other youths to lead the protest against police brutality in October 2020.

“In December, I will be leading A Walk For Peace, to herald the healing of our land. Let me use this occasion to extend an open invitation to our youths, members of the diplomatic corps, civil society groups, students and the media as well as other stakeholders to join me,” the Governor said.

“Let us show the world who we are. We are Lagosians. A people of great renown, driven by the irrepressible spirit of Lagos,” he said.

None of the entertainers have reacted or accepted the call from Sanwo-Olu.