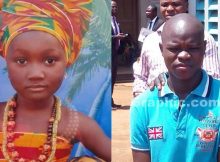 A heartless 22-year-old man yesterday confessed to the Accra Central District Magistrate Court that he killed a seven-year-old girl at Ashaiman, near Tema and had se.x with her corpse. The incident happened in Ghana.

The man identified as Lucas Agboyie, alias “Sympathy” revealed that he strangled his victim after she had refused his advances and even begged him not to have se.x with her.
“I then took her to my room and slept with the body repeatedly,’’ Lucas said, to the shock of the audience in the packed courtroom.
He revealed that on the day of the incident, he smoked marijuana, right after which he saw the girl passing by his house.

“It was a Sunday morning and after taking ‘ganja’, I saw the girl passing. I called her and sent her to go and bring me my towel that had been hung behind my house. On her return, I told her that I wanted to sleep with her but she refused.

“I held her hand and she began struggling with me. She begged and told me to let her go and started screaming. So I strangled her.
“I then took her to my room and slept with the body. Afterwards, I took the GHC20 she had in her possession and used it to buy ‘ganja’,” he said.
The shocking revelation left the victim’s mother in tears. Agboyie has been charged with murder and is currently going through committal proceedings at the magistrate court, a prelude to the actual trial at the High Court.