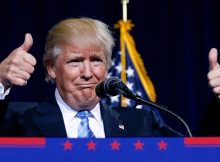 Donald Trump, the Republican candidate in the United States forthcoming election has issued a Statement Regarding his foreign policy towards African countries.

The statement which was obtained through one of his local aid in the great state of Ohio shows that Mr. Trump is going to be the best American president for African nations. He clearly stated that he is in total support of right to self-determination of any ethnic minority that want freedom from artificial countries created by the colonialist. He further explain that it is a very sacred right express by all free people to declare their independence from where they already are.

READ ALSO :  From Borno To Sokoto, Why Northern Elite Are Obsessed With Finding Oil In The North

He used the Brexit referendum a reference to his new policy toward Africa, he believe that political conflicts across Africa will reduce if Africans are allowed to create their countries according to their God giving boundary. He want Africans to embrace peaceful referendum like United Kingdom instead of forced unity that cost millions of lives without meaningful progress.

The people of the United Kingdom have exercised the sacred right of all free peoples. They have declared their independence from the European Union, and have voted to reassert control over their own politics, borders and economy. A Trump Administration pledges to strengthen our ties with a free and independent Britain, deepening our bonds in commerce, culture and mutual defense.”

READ ALSO :  Biafra: Police Deploys Personnel To Southeast, Ready To Arrest Nnamdi Kanu
The whole world is more peaceful and stable when people are allowed to exercise their right to self-determination, people will pledge allegiance to their God giving identity and natural boundary. He further promised that he will not engage in evil regime change policy of Obama administration which destabilized Libya and many other African countries”. The regime change of Clinton/Obama brought chaos, instability, destruction and death to many African people.

He promised to look into Biafra case and see how he can help in achieving peaceful political solution without bloodshed. He told the Biafra flag waiving man at his rally that “if the people of Biafra want Republic of Biafra, it will be a reality during my administration”. He further told the Biafran agitators to hold on help is on the way.

READ ALSO :  Before I Came To Biafra, I Heard That Biafrans Fought Like Heroes - French Ambassador
Under my Administration, Africans will have the right to redraw their map trough referendum and peaceful political process just like we have in Europe and other developed part of the world. Under Trump Administration we will remove the embargo placed on Nigerians by Obama administration concerning Visa lottery program, he said Nigerians are smart and intelligent people, they contributed immensely to the development of modern America, we want them here in large number and my administration will enroll them back in visa lottery program, Obama is unfair to his fellow Blacks for removing the giant of Africa from the program he said.
Post Views: 14