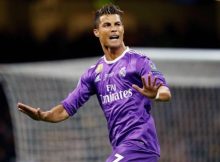 First it was Neymar, then Lionel Messi, now it’s reigning World footballer of the year, Cristiano Ronaldo! -The Real Madrid and Portugal ace has been accused by courts in Madrid, Spain of evading tax up to the tune of €14.7 million between 2011 and 2014.

Ronaldo, 32, who just welcomed new twins and is Forbes highest earning sportsman for the second year in a row has been charged with four crimes against the public treasury. READ ALSO :  Man Utd players fighting for LVG - Rooney
According to a statement from the Madrid court’s prosecutor’s office,
”Ronaldo, a four-time Ballon d’Or winner, had used a business structure created in 2010 to hide the revenue generated by his image rights from the Spanish treasury, a voluntary and conscious breach.”
Gestifute, the multi-million dollars sports agency representing Cristiano Ronaldo, owned by Jorge Mendes, is yet to comment on the matter.
READ ALSO :  Vincent Enyeama’s Lovely Response To Fans Who Said His Bible Was Old
If Ronaldo is found guilty, he could be sentenced to prison (although suspended) like his rival, Lionel Messi, was last month fined $2.3m for defrauding the Spanish tax authorities and also received a 21-month suspended jail sentence.
Post Views: 49