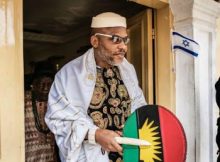 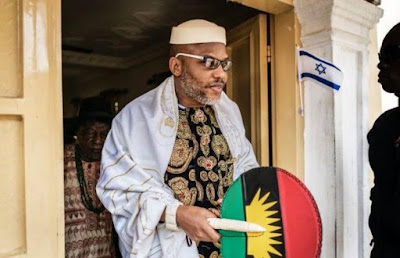 The All Progressives Grand Alliance, APGA, has written an open letter to the leader of the Indeginous People of Biafra IPOB, Nnamdi Kanu, asking him to drop his vein sense of Emperorism in the struggle for Biafra.

In the letter signed by its National Publicity Secretary, Barr. Ifeatu Obiokoye, the party condemned him for his recent threat that there would be no election in the South East, starting with Anambra whose governorship election is slated in November, if FG does not agree on a referendum for Biafra.

Kanu said this in a recent interview with DW Africa.

In the open letter released yesterday, APGA said Kanu’s call is irresponsible, irredentist and totally devoid of any sane or intellectual focus. Read the open letter below…

The National Publicity Secretary of APGA, Barrister ifeatu Obiokoye has described Nnamdi Kanu’s call for a boycott of general elections in the south-east, beginning with the Governorship polls scheduled for November 18 2017 in Anambra state, as irresponsible ,irredentist and totally devoid of any sane or intellectual focus.

I must let you know that while we all acknowledge your leadership of IPOB, you certainly do not speak for Ndigbo of the south-east extraction. You must appreciate that for different logical reasons and perception, the Biafra concept has attracted favorable comments amongst our people, ostensibly borne out of the marginalisation of Ndigbo in the Nigerian state. In this popular agitation for Biafra, Ndigbo have not instituted a separatist movement, nor a terrorist gang as it were.

We are more concerned about the continued existence of Nigeria under the present structural arrangement.

Logically, we have continued to demand for a constitutional conference to determine how this country can be restructured, so that every segment of the geographical expression called Nigeria can continue to co-exist (if necessary) upon agreed principles and basis.

We have consequently demanded for a re-visiting and implementation of the reports of the 2014 constitutional conference, Which arguably has addressed the parameters for the restructuring of the nation.

You would ostensibly notice that as the Youths of the East are agitating for Biafra, the Arewa Youths are equally restive, the same goes for Níger – Delta Youths and Youths from Oduduwa states.

To my mind, a resolution of these seemingly conflicting Challenges, rests with the development of our democracy and the application of a workable structural process of national consultation, negotiation and agreements.

These challenges are borne out of the fact that today we do not have a country that we can collectively call our nation and home for all, irrespective of tribe and tongue . You must understand therefore, that the right to vote and be voted for is a Universally declared Right under the United Nations Charter of People’s and Citizenship Rights. More so ,under the constitution of the Federal Republic of Nigeria 1999(as amended).

The powers of INEC therefore, to conduct general elections in any part of the country are constitutionally sacrosanct .

May í remind you that the success of the sit at home directive of 30th May was borne out of respect for the dead during the last civil war. Besides, the typical Nigerian loves public holiday and would quickly embrace one whenever declared.

Mind you that the traders who closed their shops and market places, was more out of apprehension for reprisal action from rampaging youths in the streets, than out of any genuine commitment or solidarity as it were.

The agitation for Biafra must therefore be taken to the next level in accordance with International Law, norms and practices which would engage intellectualism and embrace contributions from the cream of the leadership and intelligentsia of Ndigbo.

Í advise you drop this vein sense of emperorism and humble yourself to the true the leadership of Ndigbo for a proper and better articulation of the Biafra struggle.

Once more, be reminded that the the powers of INEC to conduct elections, albeit in the south-east, is vested and guaranteed under the constitution of the Federal Republic of Nigeria…. Which cannot be threatened or undermined under any pretence.