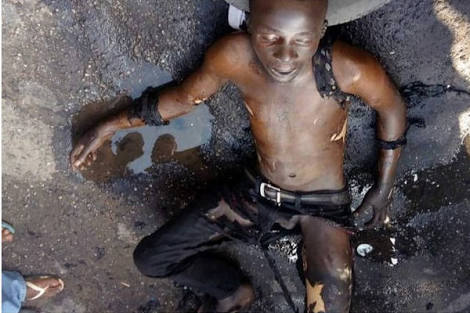 Here are things you need to know about the barber who set himself ablaze on a road leading to Omole Estate, near Akiode Bus Stop, Ojodu area of Lagos state.

The man, who became a news item after burning himself, has been identified as Ahmed – according to a report by Punch.
The burning man was a barber.
The sad incident occurred on a road leading to Omole Estate, near Akiode Bus Stop, Ojodu area of Lagos state.
According to eye-witnesses, the incident occurred around 4:30 pm on Wednesday, July 4, 2018.
Ahmed emptied a five-litre jerrycan of petrol on his body; struck a match and lit himself.
Ahmed was rescued from the scene around 5:00 pm by officials of the Lagos State Ambulance Services after passersby had rushed to put the fire out.
Ahmed died while he was receiving treatment at a hospital.
On Friday, July 6, 2018, a senior official of the Lagos state emergency unit confirmed that Ahmed died while he was receiving treatment.
The Lagos State Police Public Relations Officer, CSP Chike Oti, confirmed the incident.