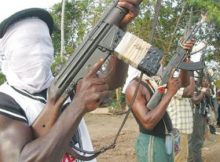 According to Chief Theo Fakama, from the local Enukorowa community, the four had been providing “free medical care and religious activities” in the Burutu area of Delta state. Fakama said they are “saddened” by the kidnapping as the victims had “brought succour to residents of the community for the past three years”.

READ ALSO :  Nnamdi Kanu: All Igbos Not In Support Of Biafra Are Pigs

The spokesman for Delta state police, Andrew Aniamaka, confirmed the kidnapping, which happened on October 13, 2017 saying “The victims are of British nationality, two of whom are a couple, and have been rendering humanitarian services in the area for a while. But unfortunately, they didn’t let the authorities know of their presence in the area all this while. There is a militant group that has been operating in the area and we believe they are the ones behind the abduction. Immediately the militants struck, they whisked the victims to the interior regions of the creek where we believe they are being held for the past five days.”

It is unclear whether any contact had been made with the kidnappers or the motive for the seizure, he added.

READ ALSO :  Meet The Teen Pregnant Whom Claims That Jesus Christ Is The Father Of Her Baby

Delta State Commissioner of Police Zanna Ibrahim told reporters on Tuesday that ‘an anti-kidnapping team is already on the trail of the suspects.”