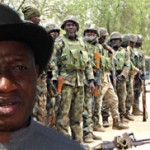 President Goodluck Jonathan, yesterday, directed the Military High Command to identify those sabotaging the efforts of the Federal Government to crush the Boko Haram insurgents in the country and flush them out of the military. Jonathan’s directive followed series of security reports indicating the existence of fifth columnists in the armed forces especially with regards to the war against terrorists in the North-East. Speaking at the commissioning and unveiling of the new cenotaph at the Military Cemetery in Abuja, the President said: “It is the duty of the officers (prosecuting the war) to detect those who are not working at par and those who are not committed to the country. “Those who will betray others; a betrayal that may lead to the massive death of officers when they are in operation, such people should be removed from service early enough. “If we are able to filter among ourselves and we are able to identify such people, they may be deployed to other places. I am not advocating the retirement of people, except it becomes very clear that such an officer has committed an offence that requires this but soldiers must be trusted people. “Soldiers must not be betraying themselves and the country. If any soldier is suspected to have this kind of inclination, the best thing is to redeploy that person from the position so that he will not be an enemy to the state and his colleagues.” Addressing a gathering that included the Minister of Defence, General Aliyu Gusau; the NSA, Col. Sambo Dasuki; CDS, Service Chiefs, IGP and PDP Chairman, Adamu Muazu, the President said: “Today is a unique day because we have formally unveiled the cenotaph with the names of the officers and men that were deployed to various operations and have paid the supreme sacrifice. I believe in most cases this may be the only link between them and the future generation, their children and their grand children. “It is a project that is dear to me, that is why I mentioned that we needed to have this memorial that will be in remembrance of our past heroes. Probably in future as nation, we may even have a bigger museum that photographs of some of our gallant officers will be displayed, so the future generation can always know what people had done, the various contributions they have made over the years. But for now this cenotaph will help. “And it is a clear testimony that the government would always remember those who served this country, especially the military and the paramilitary officers that have to be awake for us to sleep. They are in the sun, the bushes and all for us to live in peace.”