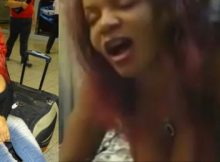 Heavy set and physically endowed actress and sex kitten, Cossy Orjiakor is back to doing what we originally know her for- movies and while at it, spoke of the infamous dog scene which she claimed almost ruined her image and career.

READ ALSO :  Facebook wants to crack down against hate speech on migrants
The controversial actress who makes it a point of duty to flaunt her 38DDD-sized breasts in risque outfits, moving on to do great things like acquire multi-million naira properties by being a sex kitten, is making a comeback to movies on a Zeb Ejiro movie set, playing a house maid which is a huge deviation from her regular roles.
READ ALSO :  See the racy pic Kenyan socialite Vera Sidika shared on Instagram, her tips to ladies is even more interesting
In a now deleted post she shared on instagram, Cossy, put up a picture of herself and veteran actress, Bukky Wright and spoke on her role in the movie-Itohan in which she supposedly had sex with a dog noting her gratitude for the role that made her who she is today despite admitting that it almost ruined her image and career.

“Finally… am working with the Mr. Zeb Ejiro… the reformer. Hmmmmm am super excited… hmmm the last time I worked with Chico Ejiro was the Itohan… Where my imagine and my career almost got ruined. Cuz of the dog scene in that movie…it actually made me who i am today. Cuz this cossy don’t give a 2fk…. dts me… Chioma house girl with my madam.@bukkywright,” she wrote.

We hope for more screen time for the unabashed screen goddess.