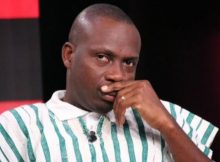 Her mother and younger sister have both stated that they see nothing wrong with the photos the actress released, as the nature of her job sometimes demands that she goes naked.

“No child is independent in this world and especially when it comes to the public figures. They don’t have a private life because they become unwanted models and role models for people who have not had proper parents at home”. He added.

Reacting to statement made by her mom and sister, he said:

“When your parents have come to endorse your nudity? Which home is she from? And a photographer asked her to pose for the pictures? What is going on? I think the family should bow down their head in shame. This is one of the biggest scandal ever because we rather hear people when the nakedness of their children comes out, they want to use every means to cover it”.

READ ALSO :  Cossy Ojiakor Shows Off Her Famous Boobs As She Celebrates Her 33rd Birthday (Photos)

According to Counselor Lutherodt, what gives him more headache over Christabel’s issue is that he has not heard of the father speaking about the uncouth act. Anytime you find homes where there are no fathers; you see people going wayward like this.