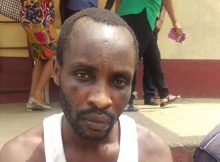 A 35-year-old man, Sunday Ushie, on Monday confessed to killing his purported ‘girlfriend’, identified as Nnena Samuel, and went ahead to have sex with the corpse, Punch reports.

Ushie, a cocoa farmer in Akparabong, confessed to the crime, saying that she never gave him the opportunity to have sex with her while alive. He said that he invited her to his house and killed her with knife before having sex with the corpse. The farmer, who said he was regretting his action, blamed the incident on the devil.

“It is the work of the devil. I do not know how. I am the one that killed her. I killed her with knife. She was my girlfriend and I knew her for just two months before this incident happened. I slept with her corpse after killing her. It was strange sleeping with a dead corpse. I never had sex with her when she was alive because she never gave me that opportunity. I was always giving her money but she didn’t allow us to have sex.”
The suspect had invited the deceased mother-of-two out in the night of January 26 and took her to his apartment. He was said to have killed the woman when she refused to allow him have sex with her.