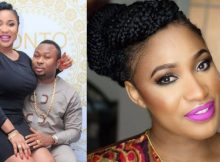 The news coming from Ghana police this time, says Tonto Dikeh, during a very violent fight at her husband, Churchill’s Trasaaco estate in Ghana, destroyed $20,000 worth of property and waved a gun at one of Churchill’s bodyguards who tried to stop her from breaking the properties.

Reason for her act – Tonto said her husband was cheating on her. She allegedly brought petrol to burn down Churchill’s house as well.
You recall, Tonto had just a few days ago, revealed in a tell-all interview that her baby’s father and estranged husband Olakunle Churchill cheated and abused her while they were together.

Asempa News in Ghana has released a video which shows a man identified as Supt. Joseph Oppong, Crime Officer at the Madina Divisional Police reading a statement allegedly written by Churchill during one of his fights with Tonto in Ghana.

READ ALSO :  2Face Idibia Speaks: Boko Haram is Not About Islam, It is a Political Issue
Oppong says they received a call to Churchill’s Trasaaco estate in Ghana where they went in to find Tonto Dikeh in a rage, destroying items in the house because she claimed her husband was cheating on her. Oppong said before they arrived, she had destroyed $15,000 worth of items and they had to restrain her adding that she had even waved a gun at one of Churchill’s bodyguards who tried to stop her from breaking the properties.