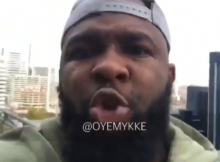 Popular Nigerian twitter user @Oyemykkee shared a video on his timeline today in which he condemned in totality the ideology that runs girls are now ending up with the good guys while the well-behaved women have none for themselves.