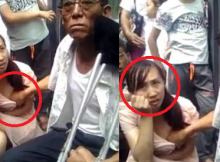 A strange new video has surfaced online which shows a man allegedly predicting a woman’s future by touching her breast.

The footage is believed to be filmed in China and has been shared on social media. The eight-second clip was posted on Miaopai, a short-video sharing platform in China, on September 8.

It was uploaded by a user named Xiao Yuwen, who claims to be a travel photographer from China’s Yunan Province.

‘Fortune telling by touching the breast, this man is taking great advantage.’

In the short video, a bespectacled man can be seen touching a woman’s breast. The man, who is believed to be a fortune teller, held a pair of crutches in the other hand.

The woman can be seen staring at him with a puzzled face.

The pair were surrounded by a group of people as the alleged fortune-telling was taking place. However, there was no conversation between the fortune-teller and woman in the video.

Many social media users thought the fortune-teller had gone too far.

One user said on Weibo, a Twitter-like platform in China: ‘This is disgusting.’

While another sounded confused: ‘What happens if a man comes for fortune telling, will he still touch his breast?’