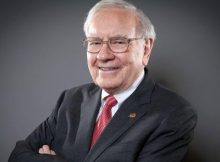 According to his company statement, Warren Buffet gave away $3.17 billion in shares of his holding company, Berkshire Hathaway to charity on Monday.

READ ALSO :  A Must Read! A Pinch of This Spice Every Day Can Prevent Memory Loss and Significantly Reduce the Risk of Dementia


Back in 2006, Buffett announced plans to gradually donate all his Berkshire Hathaway shares and in 2010, Buffett launched The Giving Pledge with Bill Gates. The initiative encourages the world’s billionaires to dedicate the majority of their wealth to philanthropic causes. As of May, 170 people had signed the pledge across 21 countries.