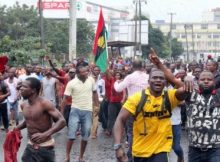 Recall that Suleiman had while addressing newsmen in Abuja after a meeting by Northern youths last week, called on the United Nations to declare the Indigenous People of Biafra, IPOB, a terrorist group.In a face-to-face video interview with Dickson Iruegbu of the Nigeria Right Now Project, Suleiman insisted that the north does not believe in restructuring and that the Igbos must leave the north.
READ ALSO :  Denying husbands Sex is Abuse – Malaysian Lawmaker

He said if the Southeasterners failed to vacate the region at the expiration of the quit notice, they will go to their various state governments to withdraw the ownership of the property they own in the region.

“We did not say there’ll be violence. But if by October 1 the Igbos in the North fail to pack their things and go, we’ll go to the government, ask them evoke the properties. And went that didn’t happen,we’ve done our best.

READ ALSO :  Linda Ikeji Drags Wizkid To Lagos Police Commissioner For Insulting And Threatening To Beat Her Up

“I’m concoring to Nnamdi kanu’s position that the Igbos are entitled to Biafra and so should quietly leave our region. We are helping the Igbos achieve their aim.

“Igbos are not entitled to be equal citizens with other Nigerians in Nigeria. No they’re not unless a referendum is conducted and they say ‘yes we are Nigerians.”