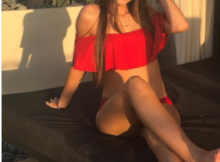 Meet Victoria Waldrip, a white teenage girl who insists she’s black. Victoria keeps mostly black friends and she goes out of her way to do things that are known to be original to black girls, like braiding her hair and other things.

Victoria even went as far as changing her birthday from March 7th to July 19th. She said July 19th was the day she found out she was black so it’s the day of her rebirth.

READ ALSO :  See The Area Where You’re Getting Fat and We’ll Tell You How to Fix It She said in a recent video: “Yes, my birthday is March 7th but July 19th is the day I found out I was black.

Like my whole entire life, my mum kept telling me ‘you’re white’ but I never believed her because I knew I was black but July 19th, I did some history, I went on ancestory.com and I found out I was 25% black and that’s how I knew it. I knew I was a black girl. So I just consider that to be my birthday because it’s just a very exciting holiday for me, so I got to celebrate.”

See the video and more photos below.