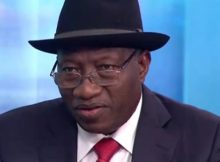 In what appears like a criticism of his successor’s selective anti-corruption war, and intolerance for freedom of speech, former President, Goodluck Jonathan, has tactically revealed why he did not detain President Muhammadu Buhari, during his reign.

Recall, that prior to the 2015 election, Buhari, the then Presidential candidate of the All Progressives Congress, APC, had threatened violence, if the 2015 elections were rigged in favour of the Peoples Democratic Party, PDP. “If what happened in 2011 (alleged rigging) should again happen in 2015, by the grace of God, the dog and the baboon would all be soaked in blood.’’

Buhari had said. Speaking at a dinner he attended in the United States, on Saturday evening, Jonathan said, “under my watch, not a single Nigerian was sent to prison, because of anything they wrote, or said about me, or the administration that I headed,” He added that,

“Nigeria had neither political prisoners, nor political exile under my administration.” Jonathan, who was the keynote Speaker at the Nigerian Lawyers Association’s Annual Dinner and Merit Awards ceremony, held in New York, mentioned some factors he considered to be his administration’s democratic credentials.