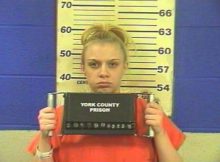 RED LION, Pa. — A woman from Red Lion pleaded guilty on Wednesday to disorderly conduct in a case in which police said she had sex so loud that it shook a dresser and bed in her neighbor’s home.

Amanda Warfel, 25, was ordered to spend 45 to 90 days in York County, Pa., Prison. She’s already served that sentence, but is being held on a detainer from Lancaster County, Pa. It was not immediately clear why that’s in place.

Warfel shared a row home wall with her neighbors, who complained of loud music, threats and sex noises coming from the other side.

She has been in jail since March 22 and previously pleaded guilty to disorderly conduct and harassment. Those charges were filed after she made racists comments toward a neighbor and refused to turn down her music, the Pennsylvania State Police said.

During the hearing, Warfel said she just wanted to go home and wished that her neighbors had been in court.

“I wanted to apologize,” she said.

District Judge John Fishel ordered her to pay court costs, saying he was “not going to put them on the taxpayers.” He also warned Warfel not to have contact with her neighbors under any circumstance.

Said Warfel: “And I will not.”