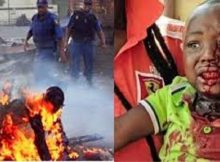 A South Africa- based Nigerian businessman, Mr. Abayomi Oyetoro, said on Thursday that his two children were still in critical condition in a hospital after Saturday’s xenophobic attacks in the former apartheid enclave.

Oyetoro told the News Agency of Nigeria (NAN) on telephone from Pretoria, South Africa, that he threw his children, aged six and nine years, over a neighbour`s fence when a mob attacked his house.

“When they came to my house in Pretoria West, I threw my three children across a neighbour’s fence to save their lives.

“The youngest hit his skull on the ground while my daughter also got badly injured.

“As we speak, my children are still in critical condition and we are praying to God to save their lives.

“ Honestly, I do not know the motive of the attack. My house was burnt and everything destroyed, including my car and international passport.

“We are just managing to survive by God`s grace,’’ Oyetoro told NAN.

He said Nigerians and other foreigners were now living in fear over reports of a planned attack on Friday.

Oyetoro appealed to the Federal Government to come to their aid following the huge loss suffered in the attacks.