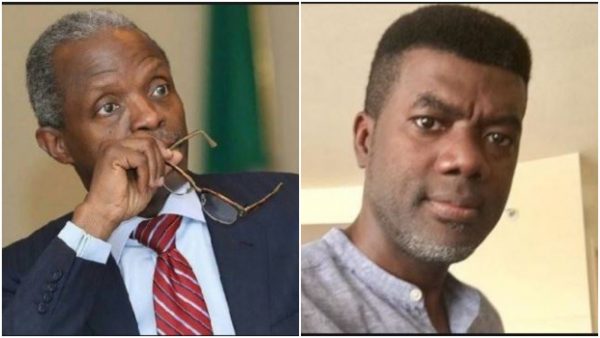 Reno Omokri, a former aide of ex-President Goodluck Jonathan, says two of the individuals alleged by Vice-President Yemi Osinbajo to have stolen $3 billion under the former president, were not members of his cabinet.

He also accused the vice-president of belittling his office by lying.

While speaking at ‘The Platform’, a programme organised by Covenant Christian Centre, Lagos, Osinbajo the duo looted the nation’s treasury when Jonathan was in power.

Osinbajo had said: “Grand corruption remains the most enduring threat to our economy. Three billion US dollars was stolen in what was called the strategic alliance contracts in 2013, three Nigerians were responsible, today three billion dollars is N1 trillion and our budget is N7 trillion.”

The strategic alliance agreement (SAA) was between the Nigerian Petroleum Development Company (NPDC) Ltd, a subsidiary of NNPC, and Atlantic Energy Drilling Concepts (AEDC) owned by Omokore and Aluko.

In a statement on Monday, Omokri said the vice-president had belittled his office by lying.

“It goes without saying that both Jide Omokore and Kola Aluko were private businessmen who had dealings with various corporations and whose dealings are the subject of litigation,” the statement read.

“Yes, Diezani Alison-Madueke was a member of the Jonathan cabinet. Yes, allegations and charges have been brought against her. However, she challenges these allegations and is ready to have her day in court, but no-where has she ever been accused of stealing $3 billion.

“She has also never been convicted by any court of competent jurisdiction in Nigeria or any country in the world.”

He said it was unfortunate that a government embroiled in controversy over the illegal withdrawal from the excess crude account could be levelling allegations against others.

“It is funny that an administration that illegally withdrew $496 million from the excess crude account without due process, allegedly to pay for 12 Super Tucano jets, is accusing the Jonathan administration of illegal withdrawals,” he said.

“Nigerians and the international community are aware that the illegal withdrawal by the Buhari government triggered an impeachment attempt against the president at the senate of the national assembly which is still raising dust.

“According to the world’s premier aviation intelligence agency, Flight Global, the cost of a Super Tocano aircraft is $10 million. Rather than make false allegations against the Jonathan government, the Buhari administration should rather tell Nigerians why an aircraft that is sold for $10 million each is costing Nigeria almost $40 million each?

“In November 2017, Afghanistan bought 6 A-29 Super Tucanos at a total cost of $174.5 million, a price tag which included aircraft transportation, maintenance spares and advanced sensors. Why is Nigeria paying $496 million for 12 of the same aircrafts?

“The excuse given by the Buhari administration that it had to make haste and pay for the Super Tocano jets because of the anti-terror war does not make sense since the US has announced that the jets would not be ready until the year 2020. What is the hurry to pay for 2020 planes to fight a 2018 problem?

“Also, when Osinbajo said ‘These cases of grand corruption and open looting of public resources pauperized Nigeria and left us with little or no savings’, he has forgotten that on October 28, 2017, he said ‘When we came in, we had a foreign reserve of $32 billion’.

“If indeed Jonathan left the Buhari administration with “with little or no savings”, then from whom did they inherit the $32 billion in foreign reserves that the vice president admitted to at the ‘Greater Nigeria Pastors Conference’ organised by the Berean Ministers Group?

READ ALSO :  Osinbajo jets out to London for a brief meeting with President Buhari and is expected back in Abuja immediately

“The truth is that no matter how far and fast falsehood has travelled, it must eventually be overtaken by truth and this time, the truth emerged from the mouth of the accuser, albeit, in a Freudian slip.”