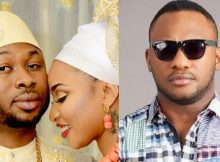 Today, the actor spoke to the couple in a video shared on Instagram, in which he asked them to make peace, adding that their marriage inspired many people especially because it deeply changed the actress.

“Sometimes when you see good things go wrong, it really hurts. You may not know this, but your marriage inspired a lot of people to want to take a chance. You guys were happy,” he said. “Tonto was happy. She was loving motherhood. She was loving being a wife. The transformation was awesome.”

He continued, “I don’t know what the issue but I just pray you guys settle your differences and get back together again.” READ ALSO :  See What Doctors Removed From The Stomach Of A Nigerian Comedian (Graphic Photos)

In his exclusive interview granted to Toast magazine, Churchill suggested Tonto Dikeh had physical altercations with his mother, and he added that he has video evidence of this. He denied having extramarital affair and said Tonto has refused to grant him exclusive access to their son.

Well, how does Tonto Dikeh feel in all of this?