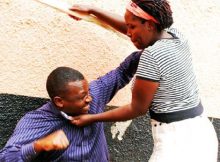 The victim, Godwin Abuul, reportedly went missing about two weeks ago in Gboko after he returned from the state owned college of education where he lectured and is alleged to have been killed by his wife.

READ ALSO :  Updates On Rev. King: The World Will Rather Sink Than For Rev. King To Die – Rev. Ernest King
A lecturer in the Theatre Arts Department of the College of Education Oju in Benue State has reportedly been murdered by his wife for cheating on her.

The victim, Godwin Abuul, reportedly went missing about two weeks ago in Gboko after he returned from the state owned college of education where he lectured and is alleged to have been killed by his wife.
A family source reveals to Vanguard that the father-of-two had revealed that he would be traveling to Katsina/Ala on a private visit, which was the last time he was heard from.

Abuul’s disappearance was reported to the police who began searching the entire state for him, which led to the arrest of a man who was spotted wearing the clothes the lecturer had last been seen in. Upon further interrogation by the police in Gboko the young man reportedly disclosed the killing of the Abuul by his wife in connivance with her siblings.

The confession is reported to have led to the arrest of several culprits including the wife of the deceased by the police in Gboko. The matter has now been transferred to the command headquarters in Makurdi for further investigations.
The undisclosed source also revealed, saying:

READ ALSO :  Please Help: ‘How My Boyfriend Always Pees In My Mouth And Beats Me If I Refuse’ – Juliet
“His wife has confessed all she knew about the matter to the Police. We learnt that she alleged that her brothers beat her husband up because he was involved in extra marital affairs, but not with the intention to kill him.
“After killing him, they allegedly dumped his body in River Katsina/Ala and also went ahead to sell his Honda car to an innocent buyer for the sum of N650,000 and of that sum, the wife of the murdered lecturer was given the sum of N400, 000 as her share of the proceed. “As I speak with you, the Police and local divers are still combing River Katsina/Ala to locate the remains of Goddy (the deceased) but we very much doubt if his remains would be seen, because the fishes must have feasted on it.”

The Police Public Relations Officer, PPRO, Assistant Superintendent, ASP, Moses Yamu, confirmed the incident, although he revealed that he is yet to get the full details of the case and that he is yet to confirm if Abuul’s wife is actually behind the murder.