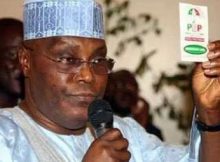 It seems the Peoples Democratic Party, PDP, is gunning for former Vice President, Atiku Abubakar for the 2017 Presidential election in the country.

Atiku, the APC chieftain, recently, said the ruling All Progressives Congress (APC) lacked internal democracy, which is one of the key tenets of democratic governance.

According to Atiku, APC is more a bullying party now than a democratic party, where the voices of the people count.

READ ALSO :  I Can't Sell Myself ,My Family To Pay Workers-Governor Fayose

He made references to the issues of lack of statutory meetings in the party and the recent congresses of the party.

Also sources at the main opposition party told Sahara Reporters that the party is quietly settling for Atiku as its Presidential candidate and governor Ayodele Fayose as the Vice, statement which the Ekiti govenor switfly denied.

Atiku Abubakar is yet to make statement on it.

Yesterday, the former new media aide to former President, Goodluck Jonathan also called the opposition party to build the party and beg Atiku to return to party which he helped to build.