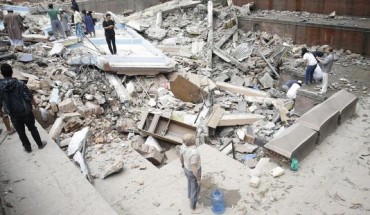 On Sunday, Nepal was struck by a major aftershock.

Here are five things to know about the tragedy:

More than 3,300 deaths have been confirmed, and the death toll is expected to rise. At least 18 were killed and dozens more were injured on Mount Everest, where the quake launched an avalanche. Dozens if not hundreds remain trapped under mounds of rubble. The nation’s capital of Katmandu was particularly hard hit.

Outside Nepal, a total of at least 61 died in India, Bangladesh, China’s region of Tibet and Pakistan.

The quake struck before noon local time about 50 miles northwest of Katmandu in an area that the U.S. Geological Survey calls one of the most seismically hazardous regions on Earth. It was felt as far away as Lahore, Pakistan; Lhasa, Tibet; and Dhaka, Bangladesh. Multiple aftershocks, including one registered at magnitude-6.7, followed.

An earthquake’s power increases by 10 times with each increase in the number of its scale. That means Saturday’s earthquake — the same magnitude as the one that hit San Francisco in 1906 — was 22 times more powerful than the 7.0 quake that devastated Haiti in 2010.

A number of buildings collapsed in the center of the capital, the ancient Old Kathmandu, including centuries-old temples and towers. Among them was the Dharahara Tower, one of Katmandu’s landmarks built by Nepal’s royal rulers in the 1800s and a UNESCO-recognized historical monument. It was reduced to rubble and there were reports of people trapped underneath.

The Katmandu Valley is densely populated with nearly 2.5 million people, and the quality of buildings is often poor.

It will be awhile before we know the full extent of the damage and the final death toll. At least 29 districts have been designated as crisis zones. Hospitals in the capital have been overwhelmed. About 90% of the 1,000 homes in the villages of Laprak and Barpak near the epicenter were destroyed.

The quake will likely put a huge strain on the resources of Nepal, a poor country best known for Everest. The nation is highly dependent on tourism. More avalanches are likely on Everest and it’s unclear how those stranded on the mountain will be evacuated to safety.

Numerous countries around the world have pledged immediate aid and supplies. Humanitarian groups such as the Red Cross, Oxfam, CARE and Save the Children are working to provide shelter, clean water, sanitation and emergency food supplies. You can also help by contributing to one of a number of aid groups.