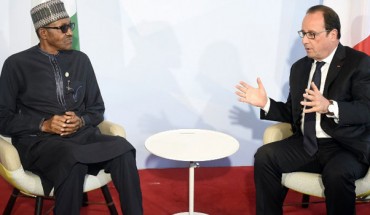 “Dear Mr. President!
The majority of Africans greeted your election to the Supreme post of Nigeria. The Federation of Nigeria, the largest truly independent African country is the matter of pride and dignity of African people. Your predecessor had relegated Nigeria to the level of Francophone African countries under neo-colonialist French rule with such domination tools as the French army and the CFA franc [currency used in Africa guaranteed by the French treasury].

After more than fifty years of formal independence, Francophone Africa remained under French rule. Except for the reigns of [Guinean] President Sekou Toure, [Malian president] Modibo Keita and [the president of Burkina Faso]Thomas Sankar, Francophone Africa has seen only “virtual independence.”
The Federation of Nigeria which fought to preserve its territorial integrity and its position vis-à-vis sovereignty of the colonial powers, must avoid any allegiance to France, which has tried once to destroy its unity by supporting the secession of Biafra. Nigerians should bear in mind the detrimental policy that France pursues in the Sub-Saharan Africa.

In the war against Boko Haram, France is positioned as saviour of Nigeria and its neighbours by inviting you and its neo-colonialist lackeys to the meeting in Paris. Why in Paris? Why not in Africa? France despises the African people and supports the corrupt presidents and stateless persons. Its military intervention in Mali which France seems to be proud of, has served and serves only its neo-colonial interests (uranium in Niger, protecting French nationals).

Accordingly, you should not be fooled, when France manifests its concern in the fight against Boko Haram.
The French intervention in Mali is becoming a nightmare for the country. Given the actions of France in this political and military crisis [in Mali], peace is not forthcoming in this country.

France’s intervention in the Nigerian will bring nothing positive in that country, on the contrary, it will only serve to stir up hatred between ethnic groups in Nigeria. Divide and conquer has always been the policy of France in Africa.
France has not enough military power to be able to provide the sustainable resolution of the armed conflict.
The only thing France is good at is adding fuel to the fire as seen in Syria and as we have seen in the Western-Iranian negotiations. The Nigerian and African people ask you not to get involved in the French political game that will only tarnish your presidential image and the patriotic feelings which the Nigerian people credited to you.
Yours sincerely,
Tiécoro Diakite”

Col. Marc Humbert, the French defence attache has praised the President Muhammadu Buhari-led government for its efforts to wipe out Boko Haram insurgency in the country.
According to PM News, Humbert said this on Wednesday, September 2, when he visited the Nigerian Army Language Institute at Ovim in Isuikwuato, Abia state.