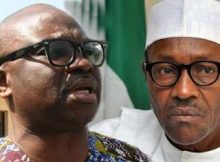 Ekiti State governor, Ayo Fayose, has called on Nigerians to reject the All Progressives Congress’ committee on restructuring, describing it as dead on arrival and a ruse.

In a statement released by his Chief Press Secretary, Idowu Adelusi, Fayose, who is also the chairman of the PDP Governors’ Forum, said the APC committee on restructuring is unneccesary since the jury is already in that Nigerians in their large numbers, cutting across party, regional, ethnic, social, and religious backgrounds have overwhelming voted for immediate restructuring of the polity.

“This APC distraction is meant to deceive Nigerians one more time. Nigerians must unequivocally reject it. They have deceived us enough and we must not allow them deceive us again. APC and its government at the centre have failed on all fronts and have not delivered on their promises to the electorate. They have lived in denial and have spent the last two years either blaming everyone else but themselves for their cluelessness or repudiating their election promises. Whereas they promised restructuring in their party manifesto, they have come out openly to deny this obvious fact. So, who does not know that their so-called committee is an ingenious attempt to deceive and sweep the raging storm over restructuring under the carpet? This is a government that specialises in sweeping serious national issues under the carpet. The report of the presidential investigative committee on the alleged corrupt activities of two principal officers of the Buhari administration has been swept under the carpet. My protest letter to the acting President, Prof. Yemi Osinbajo, on this issue has not received the speedy attention it deserves”he said

“Rather than this time-buying committee, the APC government should make haste to respect the overwhelming views of Nigerians on restructuring. The 2014 Political Conference Report is there; the APC-government should swallow its vain pride and revisit it. APC as a political party must know that it is not bigger than Nigerians; it is not even up to 5% of the population of the country. Rather than waste resources on a wild-goose chase, there are more pressing needs to urgently attend to, such as the spiralling violence all over the country, resurging Boko Haram, an economy that gets worse by the day, and a suffering, hunger, and misery never-before imagined in the land if this country must be salvaged from the dangerous edge of the precipice” he added.