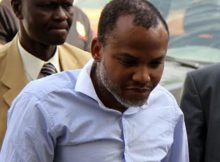 Arewa Youths have demanded the re-arrest of IPOB Leader Nnamdi Kanu, calling him a threat to the unity of Nigeria.

The Speaker of the Arewa Youth Assembly, AYA, Mohammed Salihu and the Clerk, Desmond Minakaro, said this in a press statement on Thursday.

“The Leadership of Arewa Youth Assembly has observed with keen interest the high level of lawlessness exhibited by Nnamdi Kanu since he was granted bail in June this year and the conspiracy of silence displayed by the federal government and its security agencies in the face of such affront by the IPOB leader. No doubt, this lawlessness is capable of disintegrating this country.

“The level of insecurity and youth agitations calls for concern by all well meaning Nigerians. These threats have turned our country in a place of uncertainty and now a laughing stock within the international communities. Nigerians now live in a state of fear and trauma for the fear of the unknown.

“Any nation or institution which cannot abide by its own laws, rules and regulations is bound to fail and not worthy of being a nation or institution. It is on record that a Federal High Court sitting in Abuja presided by Honourable Justice Binta Nyako on the 28th April, 2017, granted bail to one Mr. Nnamdi Kanu on health grounds with about 12 conditions attached to his Bail.

“Gentlemen of press, you will all agree with us that the said Nnamdi Kanu has openly violated his bail conditions, chief among which are that he should not address a press conference; a rally and should not be in a gathering of not more than ten persons.

“The most surprising and amazing of this is that the Federal Government is watching while Nnamdi Kanu is creating a state within a State, threatening to stop Anambra State gubernatorial election by holding rallies in South South and South East states and using provocative and inciting words, granting interviews to the press, which pose a threat to national unity and security.

“This level of lawlessness has left us with no option than to doubt the ability of our Acting President to successfully preside over the affairs of our country. Our Acting President seems to be under the control of some cabals when it comes to decision-making.

READ ALSO :  Genevieve Nnaji Is All Natural And fresh-face In New Photo

“We therefore, wish to advise the Acting President to sit up and be in firm control of the government of Nigeria and begin to address the myriads of issues threatening the unity of this great nation,” the Arewa youths said.