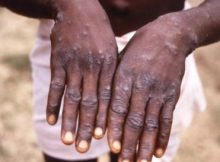 The Lagos State Government has revealed that two suspected cases of Monkey Pox have been recorded in the state.

The commissioner for Health, Dr.  Jide Idris disclosed this at a news conference on Monday, saying that the two suspected cases were currently being investigated in the state.

READ ALSO :  How My Father Had sex With Me With Condom To Test My Virginity

“Though no confirmed case has been recorded, there is need to sensitise members of the public and provide adequate information on measures for prevention and control of the disease in line with the policy of the State government,” he said.

The new airborne viral disease which broke out from Bayelsa State has also be recorded in Akwa Ibom state.