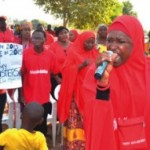 Two-hundred and sixty-two days after their daughters were kidnapped from school, some of the distraught parents of the students of Government Secondary School, Chibok, Borno State, on Thursday criticised President Goodluck Jonathan for not fulfilling his promise to rescue the girls from the custody of Boko Haram.
The abduction of the 219 girls from their hostel at night on April 14, 2014 has attracted global outrage and the President had promised several times that the girls would be rescued alive.
Nine of the abducted girls’ parents, during their meeting with the BringBackOurGirls group on Thursday in Abuja, carpeted the President for failing to bring back the schoolgirls.
The leader of the parents, Rev. Mark Enoch, accused the government of having a hand in the abduction of the girls, noting that the principal of the school in Chibok had, few hours before the abduction, locked the girls in their hostel and warned them not to leave.
Enoch explained that the relatives of the principal and the school matron were able to rescue their daughters
from the sect, leaving other girls in captivity.

“This is intentional, the hand of government is in the kidnapping; we want the government to bring back our girls. If they cannot do it alone, they should seek the assistance of the United Nations and some advanced countries, the distressed father said.
The cleric, who appreciated the BBOG for not giving up on the girls, noted that but for the activities of the coalition, the issue of the girls would have been forgotten given the remote location of the Chibok community.
Another parent, Mrs. Samuel Abana, asked the President to fulfil the promise he made in July, 2014, when he met with the parents at the Presidential Villa, Abuja. The President had told the parents that the government would secure the release of the girls.
Abana, who broke down in tears while speaking, recalled that the Federal Government had initially denied the abduction before Jonathan met with the parents and pledged to rescue their daughters.
“I want to remind the President of his promise when he met with us; he promised to rescue our daughters, he said he would bring the girls back, but six months later, there is no result. Mr. President, will you fail to rescue them, if your daughter is abducted? If you can’t do it alone, invite the United Nations to come and rescue our daughters,” she said.
Another parent, Bulama Jonah, recalled how the school principal sent his daughter home because she had not paid N300 for testimonial certificate, adding that the girls had just two subjects to do in their examinations before they were taken away by their abductors.
“The saddest thing was that my daughter was sent home because of N300 just a day before she was kidnapped; I gave her the money for her testimonial and she went back to school only for her to be abducted,” he said.
Mrs. Martha Enoch said she was tired of government’s failed promises, and urged it to take whatever action was necessary to rescue the seized girls.
“Government kept saying they would bring back the girls, but if they can’t bring them alive, they should bring their dead bodies,” she stated.
The BBOG lamented the failure of the President to mention the issue of the Chibok girls in his New Year broadcast, stressing that it showed that the government did not care about them.
Few days after the girls were abducted, Boko Haram claimed responsibility for the kidnapping. It released a video of the girls while the sect’s leader, Abubakar Shekau, boasted that the young girls, most of who were said to be Christians, had been converted to Islamic religion and that they would be given out in marriages at a token.
While unconfirmed reports said that some of the girls had died of snake bite in the forest where they were kept, a handful had escaped from the insurgents’ captivity.
The United Nations in August had announced rehabilitation facilities for the escaped Chibok girls.
In a statement on the UN website, the United Nations Population Fund had said that it was working in collaboration with the World Health Organisation and the United Nations Children’s Fund to set up clinics to provide health screening for any of the girls coming back, as well as educating those who had escaped.
The representative of the UNFPA in Nigeria, Ms. Rati Ndhlovu, had also been quoted as saying, “The girls are running from home and they have no menstruation pads and have nothing to use. They need water. They need the basic things that keep a woman dignified.”