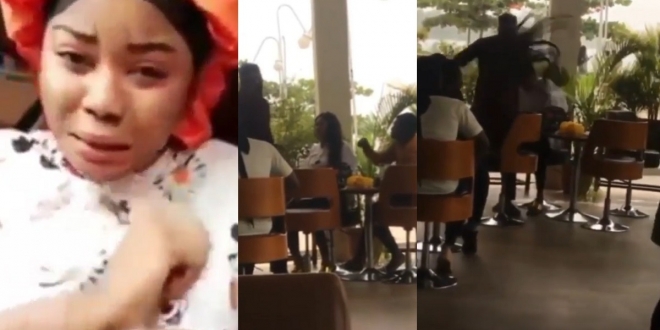 “Don’t add to my depression,”– Lady whose fiancé snatched wig, engagement ring and slippers he gave her over alleged cheating, begs Nigerians

The Nigerian lady who was caught on camera in a viral video being embarrassed by her fiancé over cheating, has spoken.

During the past weekend, the lady was at Jabi Lake Mall with a man when her fiancé walked up to them, confronted her and then snatched the wig he bought her from her head.

In the video that went viral, the man is also seen taking her slippers and engagement ring before storming off from the scene. Watch the video below,

Now, in a new video shared by the lady on social media in reaction, she admits that her man overreacted by collecting all he gave her but she begged Nigerians to stop alleging that she was cheating on her fiancé.

According to her, she was not caught in a compromising position and doesn’t want Nigerians giving her a bad name. She goes on to beg people not to drive her to depression and added that she now understands why people commit suicide.

Watch her react in the video below,

READ ALSO :  Please Advice Me! I Had The Best Sex Of My Life With My Step-Daughter And Now She Wants To Have My Kids
Post Views: 52