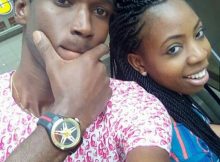 On July 3rd, fast rising comedian, Chinedu Paul aka MC Think was lynched and burnt to death by members of the Ikorodu vigilante gorup who mistook him for a member of the dreaded cult group, Badoo, that have carried out series of attack in the town. In a new interview with The New Telegraph, his fiancee of three years, Esther Demenongu, recounts the night he was lynched and how she narrowly escaped being killed with him. Narrating what happened that night, Esther said her hubby had just collected his car which he bought as second hand and had just finished panel beater work and was about to paint it when it broke down while he was on his way back home in Ikorodu. According to her, MC Think, his mechanic whome he called to help him tow his car to the workshop and the mechanic’s assistant were killed in the attack. Esther had left her house in Festac town to Ikorodu to celebrate their 3rd year of courtship with him.

“That night, I was with him. I just came that Saturday to spend some time with him. And like I said, after he was done with the panel beater, he went and collected the car. Unfortunately, while bringing the vehicle home, just a bus-stop from where they were killed, the car broke down. He felt like using another but experienced mechanic at this time since the former one had not been able to fix it properly. It was a Honda CRV brand of SUV. He remembered and called one Sola in Festac, who was experienced in fixing Honda brand of cars. Sola agreed to come on Sunday, but Chinedu told him that he had a function in the church on Sunday, so he should come on Saturday instead. My ‘Sweetness’ was among the comedians in the church that was supposed to perform at the youth programme. Unfortunately, the mechanic didn’t come early as he left Festac around 8pm and before he could get to Ikorodu, it was late. But while on his way to Ikorodu, he called to apologise to my fiancé for coming late. Everybody knows the traffic situation in Lagos, especially along Ikorodu axis. When they eventually got to the place and called my fiance, he was saying that it was late but he couldn’t leave them there alone; he was not heartless. Eventually, he left me in his house with a promise that he wasn’t going to Festac with them. They were to tow the motor back to Festac. So, when he left, I went back to sleep. I woke up and he wasn’t back yet. It was around 1am. I was angry because he said he wasn’t going with them to Festac. I started calling his number around 1pm, you can see my phone, but there was no response. Someone was with the phone but was cutting my calls. People asked why he went out late but he was just two bus-stops away from his house, where the vehicle broke down at Shagam. I didn’t know my ‘Sweetness’ has entered into wrong hands. Sadly, Sola and the person he came with, who was supposed to be a rewire, were killed alongside my ‘Sweetness.’ The vigilante claimed they saw a chain and engine oil in his vehicle, which were the instruments used by Badoo members”.

“I don’t know what to think again. He saved my number with ‘Sweetness’ and once I call, my picture will appear. So, they knew I wasn’t a man. They were so heartless not to pick my calls, at least, to hear me out, perhaps, I could have averted that tragedy. I was worried; I was even sending him text messages since he wasn’t picking my calls, thinking that he was the one with his phone. I was even threatening to come and meet him there if he didn’t want to pick my calls. I’m sure he would have told them that I was calling him but they denied him access to his phone. They killed them around after 3am because that was when his phone was switched off completely. Then I started praying, thinking it was police that held them, not knowing that my ‘Sweetness’ had already gone”she said

“I couldn’t sleep and so, early in the morning, I rushed to the scene when the news filtered in. When I got there, I saw somebody with a cutlass and their bodies on the ground. I asked what happened and he said he was hearing Badoo. I screamed out that my fiancée was not a Badoo member. I couldn’t hold it. I lost it there and went emotional. It was cruel and hurting. Some of them beat him with clubs while others, cutlasses”

According to her, the deceased always went about with his complimentary card which the vigilante members could have used to identify him.

“There were complimentary cards in his wallet with which he could have been identified, His school ID card was there too. More importantly, they saw my calls that night and they couldn’t pick my calls. These were enough to identify him but they insisted on killing an innocent person; If we start killing people like this, the world will not contain anybody; I want them to bring his wallet, his phones, and video where they confessed. Also, where is the money in his wallet meant for the guys?”.

Esther says she is yet to believe that he is dead.

“I met him on the Island. I have not been to Ikorodu before and for me to follow a man to Ikorodu, that man must have some great qualities. He was a caring and loving man. He was just different from every other man. In fact, he was everything to me. I can’t still believe it’s true, that he is dead, because he had told me so many things, and promised me so many things. I love him for who he was. He didn’t have money but I was with him because he had all the qualities every woman needs in a man. We were together for three years and we never broke up for one day and come back again. Fights happened and it never lasted for a whole day. I’m going to miss everything about him, a whole lot about him. The promises will never come to pass. It’s sad”.