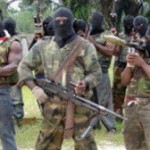 Boko Haram’s seizure of a key town and military base in Nigeria’s far northeast has tightened its grip on the region, undermining efforts to tackle the insurgency, experts said on Tuesday.
The capture of Baga and the headquarters of the Multinational Joint Task Force (MNJTF) now means the Islamists control all three of Borno state’s borders with Niger, Chad and Cameroon.
Analysts said that as a result, the militants were in a better position to launch fresh attacks both within Nigeria, including against the key city of Maiduguri, and across borders.
“The capture of Baga is of enormous significance,” Abdullahi Bawa Wase, a Nigerian security analyst who tracks the Boko Haram conflict, told AFP.
“It has put a lie to the Nigerian government claim that it is on top of the situation. It is a serious symptom of defeat on the side of the government.”
Boko Haram has had Baga in its sights for months, as it was said to be one of the last towns in northern Borno under federal government control.
The militants have seized more than two dozen towns in northeast Nigeria in the last six months in their quest to establish a hardline Islamic state.
With Baga the latest to fall, Boko Haram has effectively encircled the Borno state capital, Maiduguri, where it was founded in 2002 and which has been repeatedly attacked.
Analysts assessed that the group’s control of border areas potentially secures it important supply lines for weapons as well as a wider recruitment base to replenish its ranks.
“Their next move is predictable, which is expanding their territory southwards,” said Wase.
– Strategic town –
The loss of Baga not only reinforces long-held doubts about Nigeria’s inability to tackle the insurgency but fears about holding national and state elections next month.
The main opposition party has said the overall result could be in doubt if tens of thousands of voters are disenfranchised because of the violence.
International Crisis Group senior Nigeria researcher Nnamdi Obasi said the fall of Baga on Saturday “dims the already bleak prospect of holding any elections in northern Borno state next month”.
Ryan Cummings, chief Africa analyst for risk consultants Red24, added that the attack could signal the start of an increase in violence before the ballot.
To do so “would undermine the inclusiveness and legitimacy of the vote”, he said.
Strategically, Baga is an important commercial and agricultural centre for northeast Nigeria and the whole Lake Chad region across to the Central African Republic and Sudan.
“Nigerian neighbours rely on Nigeria for substantial parts of their goods which are supplied through Baga and Gamboru Ngala, which fell to Boko Haram some months ago,” said Abubakar Gamandi, head of the Borno fish traders union.
“Therefore the fall of Baga to Boko Haram will have an adverse ripple effect on these countries.”
– ‘Morale booster’ –
Nigeria’s highest ranking military officer, Chief of Defence Staff Alex Badeh, told reporters on Tuesday that Baga can be recaptured, although he refused to give a timeframe for any counter-offensive.
Asked whether the town can be retaken, he said only: “Why not?”
But getting it back could be a struggle, with Boko Haram likely to be boosted by a victory against a multi-national force.
Badeh said Niger and Chad had withdrawn their troops from Baga but analysts said the symbolism of the defeat could have wide-ranging implications for the insurgency and international support.
“This kind of victory will embolden them (Boko Haram) to launch more audacious attacks in future,” said Obasi.
“The capture of Baga is a big booster to Boko Haram and reinforces their claim that they are in full control of the situation because they are matching rhetoric with action,” added Wase.
In Niger, the mayor of the border town of Diffa, Hankaraou Biri Kassoum, said on Monday that fear of cross-border strikes had already increased in recent days.
Cameroon’s far northern region has faced repeated attacks but a new multi-national force to combat Boko Haram is yet to be deployed.
The defeat of the MNJTF “could leave other partners dispirited”, said Obasi, while Cummings said the Baga HQ was likely to have been “a key operational node” for the planned new unit.
“This incident is probably also an embarrassment to Nigeria’s more distant international partners, as the Baga outpost was supposed to have been supported by military advisers and surveillance provided by some Western countries,” said Obasi.