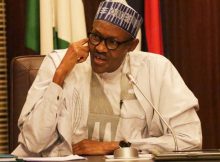 In what appears a further marginalisation of the South East zone, the Fed­eral Government has left out the region in projects which President Muhammadu Buhari plans to execute with the pro­posed $29.960 billion infra­structure loan.

A breakdown of how the loan would be spent on infra­structure between 2016 and 2018 shows that none of the projects contained in the gov­ernment’s document is locat­ed in the South East geo-polit­ical zone.

READ ALSO :  See What Donald Trump Say To The Biafra Flag Waiving Man At His Rally

President Buhari had on Tuesday asked the Senate to ap­prove the loan from multilater­al financial institutions to ena­ble his administration execute critical infrastructure and oth­er social intervention initiatives across the country.
The Finance Ministry said the $29.960 billion loan is de­signed to address infrastructure deficit in the country.

But in a statement released to journalists on Thursday on the projects to be funded by the loan, there was no single infra­structural project allocated to the South East – an area most acutely hit by poor infrastruc­ture and an acute shortage of various social amenities. According to the statement, issued by the Special Assistant to the Minister of Finance on Media, Mr. Festus Akanbi, in­frastructural projects are allo­cated $18.3 billion.

The balance of $11 billion will be expended on Eurobond ($4.5 billion), Federal Govern­ment Budget Support ($3.5 bil­lion), Social Support for Educa­tion and Health ($2.2 billion), Agriculture ($1.2 billion), and Economic Management and Statistics ($.2 billion).

READ ALSO :  Leaked CBN Documents Show How Dangote And Other Big Corporations Are Fleecing The Nigerian Economy Of Foreign Exchange

According to the statement, the borrowing has a three-year plan covering proposed pro­jects for 2016-2018 and is ex­pected to be phased over the three year period.

The ministry said that the borrowings are highly conces­sional (non-commercial), with low interest rates and long ten­ors.

The Federal Government affirmed that the funding is being sought from multilateral institutions such as the World Bank, the Africa Development Bank (AfDB), the Islamic De­velopment Bank (IDB), Japan International Co-operation Agency (JICA) and the China Exim Bank.

The planned Eurobond is­suance in the international capital markets, the statement pointed out, is the only com­mercial source of funding.

But when The AUTHOR­ITY contacted Akanbi on the apparent omission of the South East on the project allocation, he said that the loan has noth­ing to do with regional consid­eration. He said that the gov­ernment would still reflect all the regions in the 2017 Budget.

Akanbi said: “I don’t have an answer to your question. This is just a Federal Govern­ment thing that was presented today. It’s not a regional thing. There are other projects like ag­riculture.
“These are strategic things just like intervention for three years’ programme. That does not stop the Federal Govern­ment from planning for all the regions next year and in the 2018 budget. It’s just for sup­port. It’s not the main thing, just an ad-hoc initiative.

“The government is going to sit down and work on the 2017 budget and all the regions will be covered. It has nothing to do with regions. These are specific projects on ground”.