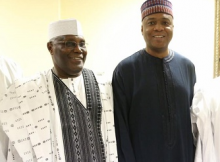 National Chairman of the Northern Youth Leaders Forum (NYLF), Elliot Afiyo, says the group has shortlist 11 politicians from the region that are eligible to contest for the 2019 presidential election.

The group said the North must retain the presidency come 2019 and that it would not allow anyone from the South clinch the presidential seat come 2019.

They warned Northern youths from collaborating with politicians from the Southern region to clinch power in 2019. “We want to reiterate and clearly warn that the North will not, and will never allow presidency to move to the South in 2019.

READ ALSO :  Nigeria: 'We are not criminals' Nigerians tell their president

As much as we can tolerate or pay any sacrifice for the unity of this country, we remain committed to a northern president in 2019.

We want to send a message to all political parties that may field southern presidential candidates in 2019 election that such action will amount to committing a political suicide” a statement by the group said The group condemned the quit notice given to Igbos residing in the North by some of its youths. “We consider the quit notice as ill advised, ill-timed and uncalled for.

READ ALSO :  Gambia: Police Imposes Ban On Drumming, Others In The Gambia

We strongly believe the groups of northern youths were motivated, encouraged and sponsored by some individuals who felt cheated by both the federal government and some state governments controlled by the APC.

These individuals were used and dumped; no recognition or appreciation was extended to them. They are, therefore, bent on destabilising the government”.