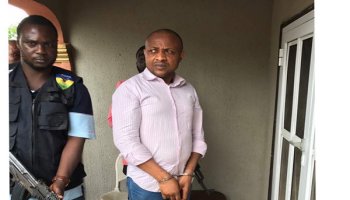 The trial of alleged kidnapper, Chukwudumeme Onwuamadike, popularly known as Evans continued on Thursday at the Lagos High Court sitting in Ikeja.

Evans’ counsel, Mr Victor Opara, told the court that the police hastily paraded the suspect without obtaining a statement from him.

The lawyer was cross-examining an Investigating Police Officer (IPO), Inspector Idowu Haruna, in the trial-within-trial of Evans and his co-defendants for the attempted kidnap of the Chairman of the Young Shall Grow Motors, Vincent Obianodo.

He told the court that his client was arrested on June 10, 2017, and was paraded the next day as a kidnapper without first giving a formal police statement.

“His capture was celebrated nationwide, he was paraded on June 11, 2017, and you immediately concluded that you had arrested a notorious kidnapper before his statement was taken.

“The statement of the defendant was recorded for the first time on July 1, 2017. His statement was taken without his lawyer being present,” Evans’ lawyer told the police officer.

He added, “I can also confront you with photographs alleging serious beating of the first defendant (Onwuamadike) while he was in your custody.”

The IPO, in his response, admitted that Evans’ statement was not taken immediately he was arrested at his Magodo residence in Lagos.

He also testified that the first defendant did not say that he would opt out of having a lawyer present.

Under re-examination by the prosecution counsel, Mr Yusuf Sule, the police officer explained why Evans’ statement was not immediately taken by the police when he was apprehended.

“Immediately the first defendant was arrested, he gave numerous information on other gang members and his victims. It took us a lot of time to be able to investigate and get information on this case.

“We had to liaise with the Divisional Police Officer (DPO) of FESTAC, that is where he gave his statement,” Haruna said.

Evans and his co-defendants are facing seven counts of murder, attempted murder, conspiracy to commit kidnapping, attempt to kidnap, and sales and transfer of firearms.

According to the prosecution, they committed the offences on August 27, 2013, on Third Avenue in FESTAC.

Meanwhile, the court also took testimonies in another related case involving Evans and Victor Aduba, a dismissed member of the Nigerian Army.

Both men allegedly kidnapped a businessman, Mr Sylvanus Ahamonu, and the police said they held him hostage for at least nine weeks and collected a ransom of $420,000 from his family.

In the case, Evans counsel also claimed that the police hastily concluded that his client collected a $420,000 as ransom from Ahamonu based solely on the allegation of the complainant.

He said, “He wasn’t arrested on June 28, 2014, on the day of the alleged incident but years later, and prior to the victim (Ahamonu) giving his statement, you had not had any contact with the victim.”

READ ALSO :  SHOCKING: How This Nigerian Man Kills Himself And His Nigerian Girlfriend In The US [PHOTO]

Responding, Haruna testified that the allegation of $420,000 ransom being paid was based solely on Ahamonu’s statement to the police.

He added that bank records were not traced during the investigation.

The police officer said, “We did not do a fingerprint analysis of the guns recovered from their hideout at Igando. For security reasons, I cannot reveal the numbers used to call during the incident.”

“We did not match those numbers with those used to call the defendant due to issues with the service provider. The $420,000 ransom was paid in the dead of the night,” Haruna revealed.

While being cross-examined by Aduba’s counsel, Mr Emmanuel Ochai, Haruna explained the role of the dismissed soldier in the kidnap of Ahamonu.

“The second defendant (Aduba) did not negotiate ransom; he collected the ransom.

“After he was arrested, he was first taken to an army barracks for disciplinary action. Four AK47 and AK49 rifles were used for the operation,” Haruna stated.