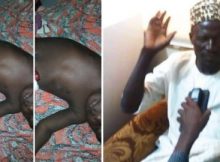 The 7-month old girl who was raped by her 57 year old stepfather, Magaji Dansale, in Katsina state last month, has died. She died at the Turai Yar’Adua hospital On Friday, April 14th, 2017.

Recall that Magaji who is currently in police custody, raped the little girl at his home in Marmachi village of Musawa Local Government Area, Katsina State.
He told newsmen that he had canal knowledge of the little girl because he believed he would become rich once he sleeps with an infant

When asked why he chose the step daughter instead of his biological daughter, Dansale said, “She is also my child, I just don’t know how it happened. I regret my action and want to plead for leniency.”

The girl’s mother, 25-year-old Zinnai Muntari, said when she woke up for the morning prayers and saw blood on the private part of the baby, her husband asked her to bring the child and after observing her, said it was pile and hurried out to bring some herbs to use on her.

READ ALSO :  This 7 years old Girl Explained How Her Daddy Touches Her, Put His manhood Into Her Mouth And Then Give Her Money

“As a mother, I felt this was unusual and reached out for help at the General Hospital Malumfashi where the doctor confirmed it was a forceful entry that tore the vagina up to the anus.

“They later referred us to the Umar Turai Children and Maternity Hospital in Katsina,” she said.

The girl’s biological father, Ibrahim Nuhu, said there was no going back until justice is served.

“All I want now is to save the life of my daughter and for justice to take its course to serve as deterrent to others,” he said.

The state Commissioner of Police, Usman Abdullahi, described the matter as “disheartening and very pathetic”.

“We suspect that the woman was drugged, for how come with probably all the screaming of the baby the mother couldn’t wake up?

“I assure you, we will charge him to court to get the case to its logical conclusion.

“It is worrisome for Katsina, the rise in rape cases is alarming. Last year alone, over 110 cases of rape were handled”.

READ ALSO :  OMG!!! 18+ PHOTOS: How This Female Bank Manager Was Caught By Husband Red Handed In Bed With Her Driver