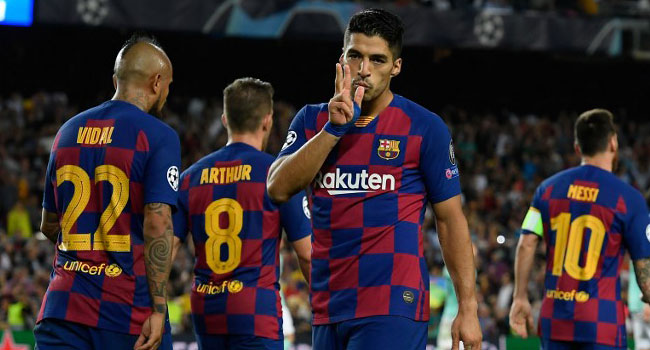 Luis Suarez cried as he bid farewell to Barcelona on Thursday but said he wants to prove he can still deliver at the highest level after joining La Liga rivals Atletico Madrid.

With Lionel Messi at Camp Nou for his best friend’s final press conference, Suarez said an emotional goodbye after scoring 198 goals for Barca, becoming the third-highest goalscorer in the history of the club.

“This is improvised because I have nothing prepared,” Suarez said wiping his eyes, having been introduced by the club’s president Josep Maria Bartomeu.

READ ALSO :  IPOB Heads To Court Over Proscription By FG

The 33-year-old’s move to Atletico on a two-year contract had been confirmed late on Wednesday night. Atletico have signed Suarez for free but could pay Barcelona 6 million euros ($6.9 million) in variables.

“I feel I’m capable of continuing to compete in this league,” Suarez said. “I feel very eager and even more after the last year we had, when I had my injury, which also leaves you with a bittersweet feeling.

“I am going the way I’m going to keep playing, with fresh motivation, with the objective to show I can continue competing.”

Suarez follows Arturo Vidal, Nelson Semedo and Ivan Rakitic through the exit door at Barcelona, where new coach Ronald Koeman has been tasked with renovating the squad.

Koeman told Suarez in August he was not part of the club’s plans.

READ ALSO :  Psquare -I love you but stop making me look like the bad person-Peter tells Paul

“I expected it because it had been said already before the coach told me but I can accept it,” he said.

“When Barca told me they weren’t counting on me, there were many calls, many offers, but I was able to go to a team that can compete as equals with two great teams like Barcelona and Real Madrid. I had no doubts.”

Suarez will go down as one of Barcelona’s greatest ever players after helping them win four La Liga titles and a Champions League.

But his departure has not been smooth, with the club keen to push the Uruguayan out but reluctant to let him join Atletico.

“Players sometimes need a change, the club needed a change and this case the coach didn’t want me,” Suarez said. “I leave with the feeling that I have fulfilled expectations. To be the third highest scorer is not easy at all, it’s something I could never have imagined.”

Suarez’s departure could affect Messi’s future given the pair are neighbours and best friends. There have been reports in Spain suggesting Messi and Suarez’s friendship was no longer considered beneficial to the team.

“It’s been a crazy month,” said Suarez. “Things have been invented, things that are not true that have been leaked and that annoy you but we have to try to stay away from all that.

“Everyone knows the relationship I have with Leo. When you arrive at Barcelona they say to be

READ ALSO :  Having Sx With Messi Was Like Having It With A Dead Body – Argentine Model (Photo)
careful with Leo and now after many years, Leo and I get along spectacularly and they say you are bad for him.

“We know the time we had in the team and that we tried to perform at our best and live up to what Barcelona is and in my case, I can leave feeling proud.”