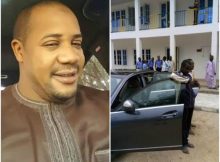 The Bauchi State Police Command, have made a breakthrough in their investigation of the cause of death of Bauchi blogger, Abdulhakeem Bauchin Bauchi, whose corpse was discovered just 3 days after he was killed on March 12, 2017.

Investigation and subsequent arrests, have revealed that the killers who committed the said crime were hired by the late bloggers ex-girlfriend who felt betrayed following his intention to marry another woman.

This is coming after detectives attached to Anti kidnapping unit of the Command arrested four suspects but the deceased vehicle was no where to be seen. “Investigation also revealed that suspects were hired by one of the victim’s girl friend who felt betrayed following his intention to marry another woman.”

Finally, efforts are being intensified to apprehend the Lady after which suspects would be charged to Court for prosecution”