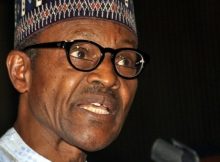 President Muhammadu Buhari has approved the distribution of N2billion each to all State governors elected on the platform of the All Progressives Congress. This is as he has given them the nod to do all within their powers to ensure that Senator Ike Ekweremadu is removed as the Deputy President of the Senate, The Punch Newspaper has reported.

The President who dipped his hands in the ecological fund according to the report was told and convinced that former President Goodluck Jonathan did same thing for governors of the PDP platform before leaving office.

These were some of the decisions agreed on after a two-hour meeting the governors had with President Buhari at the Presidential Villa, Abuja, on Tuesday.

Governor of Imo State, Rochas Okorocha who is also the Chairman of the APC governors also known as Progressive Governors Forum had initially told State House correspondents at the end of the meeting that the governors had decided to intervene in the crisis in the National Assembly, without giving details of their intervention.

However the report confirmed that there was a consensus at the meeting that it was an aberration for Ekweremadu, who is a Senator from the opposition Peoples Democratic Party, to continue in office as Deputy President of the Senate.

“The governors sympathised with the President (Buhari) for working with a National Assembly that is largely seen as unfriendly.

“They sought and got the President’s permission to intervene in the matter in their own way.

“They argued that the truth of the matter is that rarely is there any Senator that emerged without the backing of their governors, hence the governors have some levels of influence on the federal lawmakers.” The report quoted a source.

Recall that Okorocha had, on Monday, said Ekweremadu should get ready to vacate his seat as the Deputy Senate President.

Okorocha had added that a candidate of the APC, Benjamin Uwajumogu, who contested in the last Saturday’s rerun senatorial election in Imo State, would displace Ekweremadu as soon as he joined the Senate.

The governor had said, “The position of Senator Ike Ekweremadu as the Deputy Senate President is at the moment under heavy threat because in no distant time, the APC senator-in-waiting from Imo State, Benjamin Uwajumogu, will take over the seat on the grounds that it is an aberration that a PDP senator from the South-East is deputy to an APC Senate President because, before now, APC could not produce a Senator from the South-East zone.”

“That issue was brought to the President’s attention and he has ordered the release of N2bn each to the APC states that did not benefit during Jonathan’s administration,” the source said.

To further cushion the effects of the downturn in economy on the states, Buhari was also said to have, during the meeting, approved that 50 per cent of money spent by states on federal roads be released to them.

Okorocha had, while briefing State House correspondents after the governors’ meeting with Buhari, said the state governors from the ruling party were concerned about the incessant happenings in the National Assembly and had resolved to look into the matter. The two chambers of the National Assembly have continued to witness crisis since inception following the emergence of leaders, who were not the preferred candidates of the ruling party, the APC.

The meeting was also attended by Vice-President Yemi Osinbajo; Secretary to the Government of the Federation, Babachir Lawal; and the Chief of Staff to the President, Abba Kyari, among others.

Ekeweremadu had in a recent statement said nobody outside the Senate can remove him from his position.