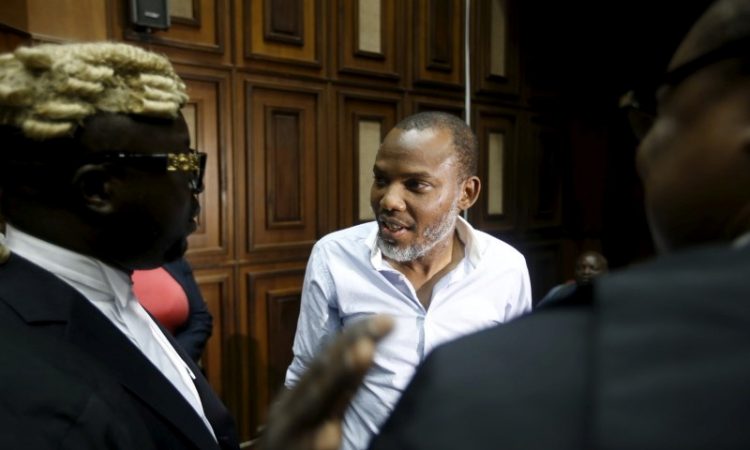 A Federal High Court, Abuja, on Friday, dismissed the fundamental rights enforcement suit filed by leader of the proscribed Indigenous People of Biafra, IPOB, against the State Security Service, SSS.

Justice Taiwo Taiwo, in a judgment, dismissed the suit for lacking in merit and substance.

Mr Kanu, through his lawyer, Maxwell Opara, had, in a fundamental rights enforcement suit marked: FHC/ABJ/CS/1585/2021, sued the Director-General of the SSS and the office as 1st and 2nd respondents respectively.

He also joined the Attorney-General of the Federation, AGF, as 3rd respondent in the suit dated and filed Dec. 13, 2021.

Mr Kanu had alleged that his health was deteriorating in the DSS custody, while also alleging that the medical personnel assigned to attend to him by the DSS were unqualified, among others.

But the DSS, through its counsel, Idowu Awo, disagreed with Opara.

He argued that Kanu’s lawyer had not shown how the doctors attending to his client were doing “quack” work.

He further argued that merely stating that the medical doctors his office assigned to attend to Mr Kanu were quacks did not amount to conflict, adding that Opara had not shown any material evidence to prove that the listed medical practitioners were quacks.

He prayed the court to discountenance the application.

Delivering the judgment, Justice Taiwo held that Kanu had not provided sufficient evidence that his fundamental rights were infringed upon by the security outfit “as there is no proof of torture before the court.”

On the allegation that the IPOB leader was receiving inadequate treatments from DSS’ doctors whom he had referred to as quacks, Taiwo said that “the applicants fails to lead evidence by calling a medical practitioner to convince the court that based on the medical report, the treatment giving to Kanu is inadequate.”

READ ALSO :  Photos: Women Throw Their Wrappers On The Ground For Nnamdi Kanu To Walk On

Consequently, the judge dismissed the suit for lacking in merit and substance.

Reacting shortly after the ruling, Oprara, in a chat with NAN, said the judgment would be appealed against at the Court of Appeal.

He said the motion he filed praying the court for the DG of DSS and Kanu to give oral evidence in court to ascertain the fact of the matter was rejected by the judge.

Justice Taiwo had, on March 16, dismissed the motion filed by Opara, asking the court to summon the DG of DSS and Kanu to give evidence.

Mr Taiwo, in the ruling, held that fundamental rights cases are special cases (sui generis) which mode of commencement are affidavit evidence as prescribed under Order 2, Rule 2 of the Fundamental Human Right Enforcement Procedure Rules, 2009.

Justice Taiwo said that though there were various modes of commencement of action, including fundamental right cases, he said Kanu (applicant) chose to commence his “under the Fundamental Right Enforcement Procedure Rules that stipulates affidavit evidence.”

He ruled that after carefully perusing all the affidavits of the applicant and the respondents before him, he was of the view that there was no irreconcilable conflicts in the affidavits.

The judge, therefore, declined to grant Kanu’s application and was accordingly dismissed.