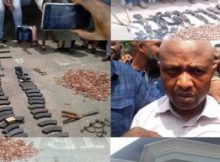 Notorious kidnapper, Chukwudubem Onwuamadike aka Evans, and his gang members with their weapons, finally paraded in Lagos

Read Here Incase You Missed It

AFTER about three months of search, police officers from Abuja, Saturday afternoon, finally arrested a notorious kidnapper in his Magodo hideout in Lagos it was reported that during the arrest he was wearing a designers wrist watch which costs $170,000. .

The most-wanted kidnap kingpin, Chukwudimeme Onuamadike, simply known as Evans, was picked up after massive shooting by the police.

An eye-witness account said Evans, thought to be about 40 years, did not resist arrest.

The security team that came for him was said to be from a special unit in the office of Inspector General of Police (IGP).

IGP was boldly written on the vest worn by the officers.

The officers, who had reportedly been conducting surveillance on the target, reportedly got to the house at about 12 noon and left at about 2.30 p.m.

Evans is allegedly wanted for numerous kidnap cases, with a N30 million bounty placed on his

Notorious kidnapper, Chukwudubem Onwuamadike aka Evans, and his gang members with their weapons, finally paraded in Lagos