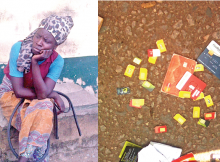 The woman, it was learnt, has been living at the spot in the last two years. The items were discovered when the officials of the Nigeria Railway Corporation (NRC), who wanted to use the place, tried to evacuate her.

An NRC official, who spoke on condition of anonymity to NewTelegraph, said the discovery of the SIM cards, ATM cards and bank tellers came to them as a surprise. He said:
“The woman has being living at the spot for some time now.
Recently, a canteen was built close to the spot where she is sitting, but some people who patronise the canteen always complain about the presence of the woman. To our surprise, when we were about to evacuate her from the spot, about 25 SIM cards, two ATM cards, different bank tellers and a phone were recovered from her. We don’t want another incident similar to that of Clifford Orji where human parts were recovered.

READ ALSO :  Call Your Bribe ”Gift” And EFCC Will Set You Free – Reno Omokri Mocks Buhari, Lawyer
We suspect the woman has someone she is working for. We are going to hand her over to the task force because we don’t want to take chances. The woman was behaving normally when we moved close to her, but suddenly she started putting up a strange behaviour and pretending to be a lunatic. We don’t see her to be what she is claiming.”
A trader, who identified herself simply as Rebecca, told NewTelegraph that she did not believe the woman was a lunatic. 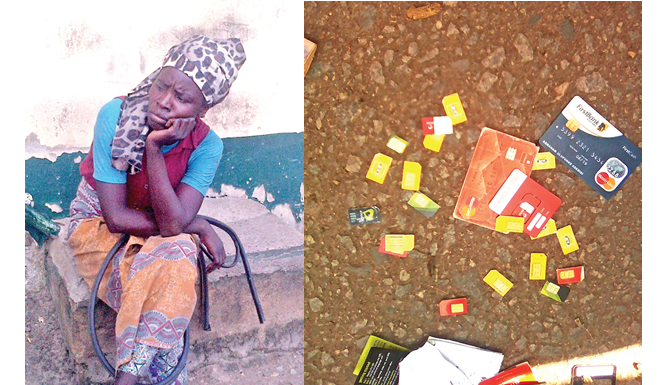 “She used to come to my shop to buy detergent to wash her clothes and to bathe. I was surprised when she started behaving strangely now.
Whenever she comes to buy from me, she always comes with crisp N500 notes. “There was a day I closed late, I saw someone who parked beside the road and was discussing with the woman. But I did not hear what they were saying.
Out of curiosity, I went to her the following day to ask her who the person was. She said those who come to visit her were her family members. Government should clear lunatics from Oshodi and its environs,” she said.
READ ALSO :  Helicopter Drops Guns For Us, Says Arrested ‘Bandit’
Another trader, who did not want her name in print, said the woman never begged for alms from passers-by. She said:
“We also want the police to beam their searchlight on that angle, because she was not soliciting alms from people. They should ask her where she is getting the money she is spending from, because we don’t want to lose our children in the market.”
Post Views: 6