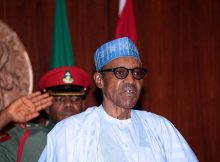 The presidency has scheduled a visit between six governors elected under the Peoples Democratic Party, PDP, and President Muhammadu Buhari in London today, Punch reports.

This is coming after an unannounced visit by APC governors a couple of days ago.

The visit is believed to have been organized by the office of the National Security Adviser, Major General Babagana Munguno (retd.).

READ ALSO :  How I Stabed My Boyfriend, And Why He Deserved To Die : Housemaid

Here are identities of the governors to visit the president:

The others aren’t known. Yet.

One of the governors expressed sadness that some of his colleagues weren’t picked by the presidency.

“Our colleagues are going to London to see the President. But I’m not happy that someone like the Governor of Ekiti State, Mr. Ayodele Fayose, or his Rivers State counterpart, Mr. Nyesom Wike, is not on the delegation”, he said.

The governors will have lunch with the president before returning to Nigeria like their APC counterparts.