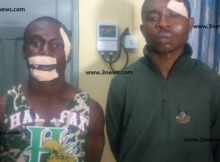 Two Nigerian men have landed in trouble for daylight robbery near the presidential palace in Ghana. The two suspected robbers who have been apprehended – reportedly deflated the tyres of their victim at the Flagstaff House traffic light and snatched GH¢6,000 (0ver 400 thousand naira) he had withdrawn from a bank at Osu.

.
The victim, the police said, pulled over to the side to check what happened. Just as the victim got down to check the fault, two guys on a motorbike zoomed past him and snatched the money he had withdrawn together with the envelope. ACP Frimpong said another motor bike rider pursued the robbers and hit the one ridding the bike with his helmet leading to an accident at 37 Military Hospital.

READ ALSO :  “Give Me N5 Million Or I Jump” – Man Threatens Suicide After Climbing Electricity Pole [ PHOTOS ]
The accident reportedly caused the money to spread on the road attracting commuters, some of whom began to mete instance justice on the three riders.
They were, however, saved by ASP Nanka Bruce, who was returning from a duty point.
Post Views: 11