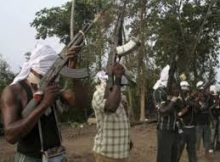 About 50 worshippers at the St. Philip’s Catholic Church, Ugwu Oye in Ozubulu, Anambra State, have been reported dead following the invasion of their Sunday service by unknown gunmen.

Reports say the gunmen were hunting for a drug baron, traced him to his house but were told he had gone to church.

On getting to the church, he had left and out of anger, probably, they rained bullets on worshippers in the church.

“About 47 persons were reported killed and many wounded”, a source said