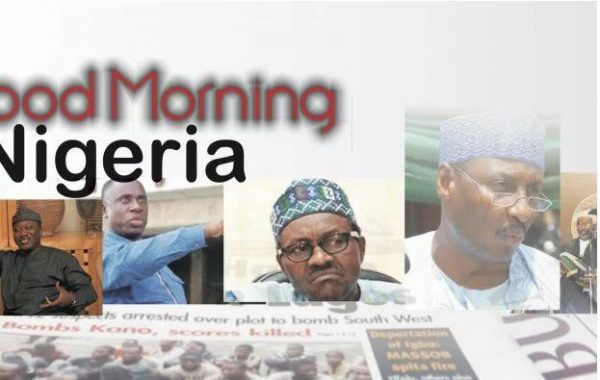 1. President Muhammadu Buhari, Monday told The American Secretary of State, Rex Tillerson, at State House, in Abuja that Nigeria prefers to have schoolgirls abducted by Boko Haram from Chibok and Dapchi back alive, and that is why it has chosen negotiation, rather than a military option.

2. President Muhammadu Buhari, Monday blamed the IG of police, Idris Abubakar, over the continuous killings in Benue by Fulani herdsmen. He said the IGP disobeyed him by not relocating to the state as he directed. He made the statement during his official visit to the state.

3. The Peoples Democratic Party, PDP, has reacted to a statement credited to president Muhammadu Buhari where he blamed the IGP for the continuous killings in Benue State. The party’s chairman, Uche Secondus said that Cabal and not Buhari was in charge of the government.

4. The Police Command in the Federal Capital Territory (FCT) on Monday said it foiled an armed robbery attack at Sauka Federal Housing Estate, Lugbe Extension of the territory and killed two suspects.The command’s Spokesman, DSP Anjuguri Manzah, in a statement, said that the operation followed a distress call on March 10 that some armed robbers were robbing the residents of the estate.
5. The Benue State Police Command has confirmed a report that two of its officers were killed during a fire exchange with herdsmen at Tse Orogbo in Nyiev Council Ward, Guma LGA of Benue State. The command’s PRO, ASP Moses Yamu, confirmed the development.

READ ALSO :  I REJECTED BIAFRA WITH ONLY 5 IGBO STATES AS I WANT RIVERS AND BENUE STATES TOO” – NNAMDI KANU

7. The Economic and Financial Crimes Commission, EFCC, on Monday grilled former governor of Borno State, Ali Modu Sheriff. Operatives questioned the former factional National Chairman of the Peoples Democratic Party, PDP, for hours at the agency’s office in Abuja, the nation’s capital. He was questioned on how he raised $72million to buy a G650 Gulfstream aircraft after leaving office in 2011.

8. The US Secretary of State Rex Tillerson says the US will assist Nigeria with latest security equipment and intelligence sharing in its efforts toward the safe return of the abducted Dapchi schoolgirls. Tillerson stated this when he briefed newsmen alongside Nigeria’s Minister of Foreign Affairs, Mr Geoffrey Onyeama, after a closed-door meeting with President Muhammadu Buhari.

10. The 17-year-old girl who got wedded to his brother in Anambra State has said she has stopped going school because of the stigma attached to the act.