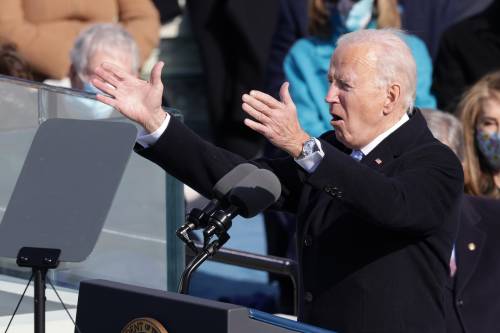 New sworn-in US President Joe Biden has appealed to Americans to unite, irrespective of their political party.

Biden, in his inauguration speech, said, “What are the common objects that we as Americans love?”

He says the events of the past few weeks – in which President Trump and his supporters have claimed without evidence that Biden’s victory was stolen – have taught us: “There is truth and there are lies. Lies told for power and for profit.”

READ ALSO :  Here Is How A Girl Poops Differently Than A Guy (Video)

We must end this “uncivil war” that pits red against blue,” he said, referring to Republicans and Democrats.

“The answer is not to turn inward, distrusting those who don’t look like you or worship the way you do or don’t get their news from the same source as you do.”

He asked that those in the audience hold a silent moment of prayer “for those we’ve left behind and for our country”.