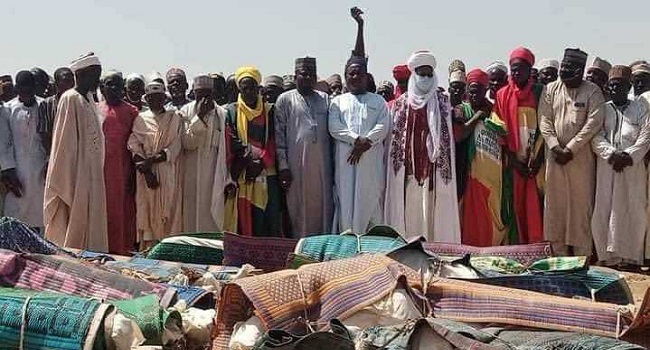 At least 20 persons have been killed by gunmen suspected to be bandits in Tungar Kwana village, Talata Mafara Local Government Area of Zamfara State.

The incident was confirmed by Amnesty International in a Tweet. The Human Rights group said the village has been deserted since the attack.

Residents however revealed that the armed men arrived in the community on motorbikes after blocking the entry and exit points into the community.

One of the residents said the attack, which was carried out on Tuesday, was a well planned and coordinated attack.

—Today 20 people slaughtered by gunmen last night at Tungar Kwana, Talata Mafara LGA of Zamfara State were buried.
—Since the attack the village has been largely deserted. pic.twitter.com/JHkmeRGDHY

READ ALSO :  2023 Election: Presidency should come to the South — Afenifere
The gunmen after attacking the village carted away livestock and escaped to the forest. The resident alleged that the attack was in retaliation for the massive ongoing onslaught by Nigerian security forces against the armed bandits in their forest enclave.

Emir of Talata Mafara, Bello Muhammed, on Wednesday morning led the funeral prayer for the victims of the attack.